The Ukrainian film The Tribe, written and directed by Myroslav Slaboshpytskiy, is one of the major successes from Cannes this year, and is not an easy film to watch. This isn’t necessarily so because the film is completely in sign language, sans even subtitles. What makes it difficult is the brutal, anarchic world it portrays, much like The Lord of the Flies, where the big ones prey on the little ones and even the innocent are capable of transforming into vicious monsters. All layers of civilization have been removed and corruption and bestiality lie at the very heart of human existence.

The Tribe is set in an institution for speech and hearing impaired students. A shy and cherubic teenager, Sergey, joins the school and finds himself in a place opposite of what one would expect of such an institution. What should be a helping, orderly and supportive environment turns out to be a visceral universe – a feral world peopled by pimps, prostitutes, drug dealers, robbers and the gratuitously violent. Sergey survives in this dog eat dog world thanks to his fighting skills, but a certain innocence still sets him apart from the rest.

One wonders if love is at all possible in this dystopian world. Sex is hurried and commercial, and the women seem to cheerfully submit themselves to being commodities. But bang at the centre of the film is a long scene, shot in a single take, that begins like a typically commercial sexual transaction between Sergey and the female protagonist Anya, but evolves into a tender act of making love. Nevertheless, love is still a complicated thing and it is never made clear if Anya genuinely cares for Sergey or just the money he brings. In fact worse is set in store for this relationship ahead, but that would be giving away too much.

All the scenes take place in sign language, and initially the silence can get disconcerting but it is to the filmmaker’s credit that the film keeps you engrossed, even if you can’t quite put a finger on what exactly is going on sometimes. In fact the occasional incomprehensibility actually ends up at times adding to the film by making it suspenseful.

Needless to say, the film is bold and audacious in terms of both form – with its practically non existent soundtrack and long, unbroken takes – and content – in privileging the universe of the silent ‘other’, while othering the mainstream film goer. But this is, of course, no sentimental drama about what it is like to be disadvantaged. The silence reinforces a sense of oppression and entrapment. And at the same time it is a humanistic privileging of the ones who have had a hard time making themselves heard.

In fact, hark back to the Ukrainian Euromaidan protests from a couple of years ago and the throttling of the Ukrainian people’s voices (although the revolution eventually was successful), and you get the gist. The film is politically allegorical and the filmmaker uses silence not as a gimmick but as a potent political and aesthetic tool. One of the scenes in the beginning is a Geography class that shows Ukraine as part of Europe. The political agenda of the film begins right here. One of the teachers, who is also the chief pimp, prostituting his students, is probably a stand-in for big brother Russia. He looks much like a goon, and tellingly perhaps, is killed with the very weapon he has helped built in his woodwork class. And the weapon is a hammer, no less.

The film does not shy away from long, unbroken takes, and this often makes the violence unbearable to watch. There is an especially gruesome abortion scene in the film. But the director is careful not to shoot close-ups of the violence which would have made the scenes exploitative. The camera maintains a cool distance instead. The sound design is from the point of view of those who inhabit the universe of silence – almost completely muted, except when enhanced at strategic points.

The film knows its “genre”, the young ‘coming of age’ drama, and makes references to several films of that ilk like Trainspotting. But there’s an added delight in actually spotting ironic mis en scene references – of joyful and ‘innocent’ films about childhood and youth like ET – The Extra Terrestrial, or the boisterous and youthful comedy – The Beatles’ A Hard Day’s Night. One fight scene takes place much like a children’s video game. However, in terms of story and atmosphere, the director seems to owe a debt to Michael Haneke.

One of the most remarkable things about the film is that the cast consists entirely of amateurs who are also hearing and speech impaired. The Tribe is bleak and unsentimental, an unsparing account of what lies at the core of human nature that also doubles up as a Ukrainian political allegory. It’s a difficult film to watch, but there’s no reason to miss it, if you want to see what an aesthetic tour de force is like. 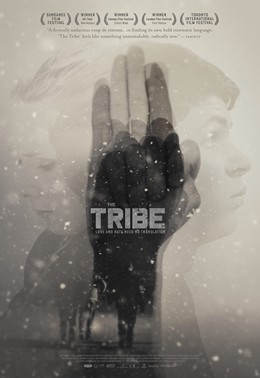 This review was first published on the website takhty.in